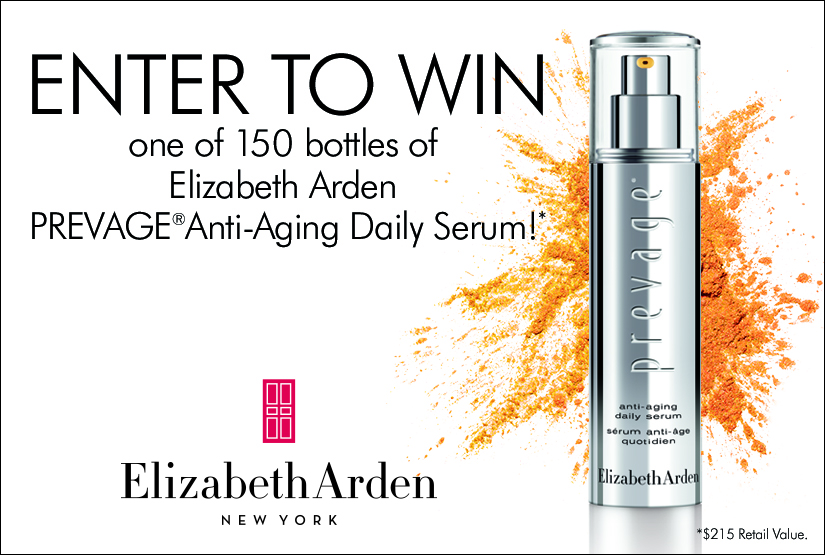 2.               This contest is open to all persons residing in Canada of at least 18 years old of age, excluding residents of Quebec. The following persons are excluded; employees, agents and representatives of Québecor Média inc., of Groupe TVA inc., of Elizabeth Arden of their parent and affiliated companies, their advertising and promotional agencies, partners, suppliers of prizes, materials and services related to this contest, or any other party directly linked to the holding of this contest, or their brother, sister, children, mother, father, their legal or common-law spouse and individuals with whom such employees, agents and representatives are domiciled.

3.            No purchase necessary. To participate in the contest, you simply have to enter using our online contest form.

5.            On October 18, 2017 in Toronto, at the office of Groupe TVA inc., a random selection of entry will be held among all eligible entries registered in conformity with section 3, in order to attribute the prize described above.

6.            The odds of a participant’s entry being randomly selected depend upon the number of eligible entries registered in conformity with the regulations and rules.

10.           Non-conforming entries. The contest organizers reserve the right to disqualify any person or cancel one or many entries of any person participating in this contest or trying to participate by means contrary to these Contest Rules or in a manner which is unfair to the other entrants (e.g.: entries exceeding the permitted limit, computer hacking, etc.). Such person may be referred to the appropriate judicial authorities.

11.           Acceptance of prize. Any prize must be accepted as described in the present Contest Rules and cannot be transferred to another person, substituted for another prize nor exchanged in part or in whole for a sum of money, subject to what is stated in the following section. Prize is accepted “as is” without any warranty whatsoever.

13.           Refusal to accept a prize. The refusal of a randomly selected person to accept a prize according to the terms and conditions of these Contest Rules releases the contest organizers of any obligation related to that prize towards that person.

14.           Liability – prize’s supplier. Each participant who is selected for a prize recognizes that upon reception of the confirmation of his status as the winner of the prize, the execution of the services in respect to the prize is the sole responsibility of the supplier of the prize, in this case, Groupe TVA inc. A declaration to this effect may be included in the declaration and exemption form.

15.           Liability limit – use of prize. Any selected person releases Québecor Média inc., Groupe TVA inc., and their parent and affiliated companies, their advertising and promotional agencies, their employees, agents and representatives from any and all liability for any and all damages he/she may suffer from the acceptance or use of his/her prize. In order to be declared a winner, any selected person agrees, if required, prior to obtaining his/her prize, to sign a Declaration Form to such effect.Erreur ! Signet non défini.

17.           Modification. The contest organizers reserve the right, at their sole discretion, to cancel, terminate, modify or suspend this contest, in whole or in part, in the case of the occurrence of an event, an error or any human intervention that could corrupt or affect the administration, safety, impartiality or the running of the contest as foreseen in these Contest Rules, , if required. In any case, the contest organizers, their parent and affiliated companies, their advertising and promotional agencies, the suppliers of products or services related to this contest as well as their employees, agents and representatives.

18.           Impossibility to act – including labour dispute Québecor Média inc., Groupe TVA inc., and their parent and affiliated companies, their advertising and promotional agencies, their employees, agents and representatives will not assume any liability whatsoever in any case where their incapacity to act would result from a fact or a situation beyond their control or a strike, lock-out or any other labour dispute in their establishment or in establishments of organizations or enterprises which services are used for holding this contest.

20.           Authorization. By entering this contest, any winner authorizes the contest organizers, their partners and their representatives to use, if required, his/her name, photograph, likeness, declaration related to the prize, place of residence and/or voice without remuneration whatsoever and that, at their discretion and without limit as for the period of use, in any media and on a worldwide scale, for publicity purposes or for any purpose that will or may be pertinent.

23.           Identification of the entrant. For the purposes of these Contest Rules, the entrant is the person whose name appears on the entry and it is to this person to whom the prize will be awarded if he/she is selected and declared a winner.

24.           Precedence: If an article in this regulation were to be declared or deemed illegal, unenforceable or invalid by a competent authority, then this article would be considered null and non-written, but all other items would not be affected and would find application in limits and authorized by law

25.           Rules contest. This is the official regulations and rules for the contest « Elizabeth Arden PREVAGE Daily Serum »

26.           Non affiliation. This contest is not affiliated or sponsored by Facebook.