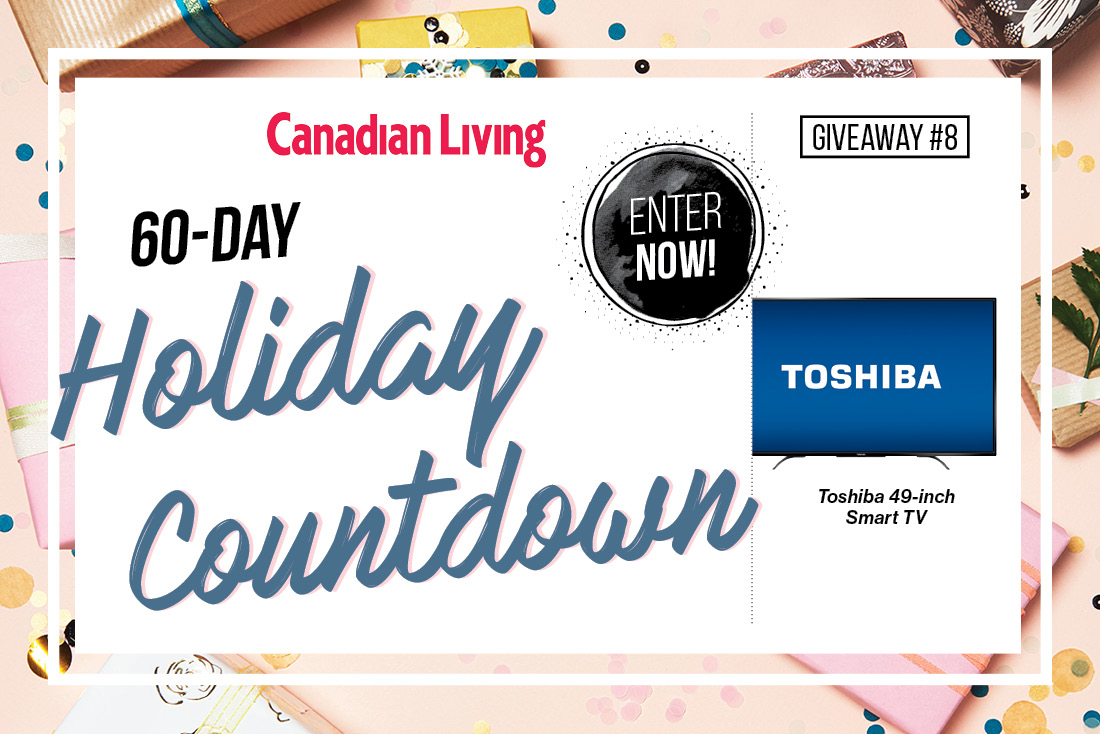 The « Holiday Countdown Toshiba TV Giveaway » contest is held by Groupe TVA. Groupe TVA is collectively hereinafter named: the “contest organizer”. The contest runs on canadianliving.com from December 14, 2016 to December 19, 2016 at 23h59 ET (hereinafter: the “contest period”). Toshiba is the prize provider.

This contest is open to all persons residing in Canada of at least 19 years old of age. The following persons are excluded; employees, agents and representatives of Québecor Média inc., of Groupe TVA inc., of Toshiba of their parent and affiliated companies, their advertising and promotional agencies, partners, suppliers of prizes, materials and services related to this contest, or any other party directly linked to the holding of this contest, or their brother, sister, children, mother, father, their legal or common-law spouse and individuals with whom such employees, agents and representatives are domiciled.

No purchase necessary. To participate in the contest, you simply have to enter the contest by visiting www.canadianliving.com Go to the « Contests » section and click on the « Holiday Countdown Toshiba TV Giveaway » icon in order to register. After, you can fill in the electronic entry form.

Once you have accessed the electronic entry form make sure to indicate your exact personal information. It is every participant’s responsibility to indicate a valid phone number where they can be reached between 9AM to 5PM during weekdays. Click on the Erreur ! Signet non défini.icon in order to send your electronic entry form no later than December 19th, 2016 at 23h59 ET. Upon reception of your registration’s confirmation message, you will be automatically entered in the contest. Cookies must be accepted in order to participate to the contest.

On December 20, 2016 in Toronto, at the office of Groupe TVA inc., a random selection of entry form will be held among all eligible entry forms registered in conformity with section 3, in order to attribute the prize described above.

Have answered correctly the mathematical skill-testing question that appears on the release form; and

Liability limit – use of prize. Any selected person releases Québecor Média inc., Groupe TVA inc., and their parent and affiliated companies, their advertising and promotional agencies, their employees, agents and representatives from any and all liability for any and all damages he/she may suffer from the acceptance or use of his/her prize. In order to be declared a winner, any selected person agrees, if required, prior to obtaining his/her prize, to sign a Declaration Form to such effect.

Modification. The contest organizers reserve the right, at their sole discretion, to cancel, terminate, modify or suspend this contest, in whole or in part, in the case of the occurrence of an event, an error or any human intervention that could corrupt or affect the administration, safety, impartiality or the running of the contest as foreseen in these Contest Rules, subject to the approval of the Régie des alcools, des courses et des jeux du Québec, if required. In any case, the contest organizers, their parent and affiliated companies, their advertising and promotional agencies, the suppliers of products or services related to this contest as well as their employees, agents and representatives cannot be held liable to award more prizes than those indicated in these Contest Rules or to award prizes otherwise than in compliance with these Contest Rules.

Impossibility to act – including labour dispute Québecor Média inc., Groupe TVA inc., and their parent and affiliated companies, their advertising and promotional agencies, their employees, agents and representatives will not assume any liability whatsoever in any case where their incapacity to act would result from a fact or a situation beyond their control or a strike, lock-out or any other labour dispute in their establishment or in establishments of organizations or enterprises which services are used for holding this contest.